Thief's War is the fourth book in the Knight and Rogue series by Hilari Bell. Available at Amazon, Barnes and Noble, and BooksAMillion.

My reviews of the first three books in the series:

I forgot to mention this in my review, but I'm anticipating the next book (Scholar's Plot) in this series. 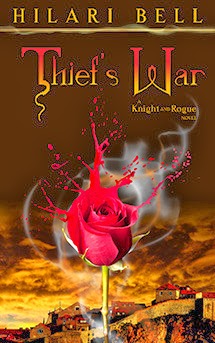 But Sir Michael and his squire, Fisk, were up to their necks in mayhem (as usual) and Fisk's old mentor, Jack Bannister, quietly slithered away.

Now Michael has tracked Jack to the notorious city of Tallowsport -- and it turns out Jack wasn't exaggerating when he said the crime boss he works for runs the town.

With the Judicars and the Sheriff working for the bad guys, a lone knight errant aided only by his trusty squire and a pack of ragtag orphans shouldn't stand a chance.

But the thing that really stands in Michael's way is that Fisk refuses to see his old teacher hang.

Thief's War by Hilari Bell
My rating: 5 of 5 stars

This series gets better with each book.

Each book is a subplot for the overall series plot. Michael and Fisk have been working their ways around their kingdom, making friends and enemies everywhere they go. I'm contemplating how all these friends and enemies are going to come together in the end. I know something is building, but I haven't figured out what (yet). Bell keeps me guessing, the way a master storyteller should. She takes all the standard sci-fantasy tricks and gives them a twist that leaves me guessing what's next.

I accepted a free copy of this book in exchange for a review because I'm biased as h-e-double hockey sticks. Bell is on my niece's and nephews' future reading lists (as soon as they are old enough to read) because I'm buying them her books.