Player's Ruse is the third book in the Knight and Rogue series by Hilari Bell. Available at Amazon and Barnes and Noble.

You can see my reviews of the first two books in the series: The Last Knight and Rogue's Home. 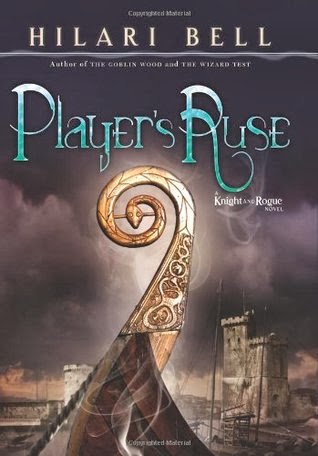 Friends Are More Trouble Than Foes

Sir Michael Sevenson and his squire, Fisk, were just beginning to enjoy the quiet life. They really should have known better. When Lady Rosamund runs away from home to marry a traveling player, former knight errant Michael makes a noble promise to help the object of his unrequited love. The quest takes our would-be heroes to the coastal town of Huckerston, where savage sea pirates called wreckers terrorize the coast. With the help of a reluctant Fisk, Michael plans on catching the wreckers and winning back his lady; but when mysterious murders and dangerous accidents threaten the town and its players, love might be the least of his problems. . . .

Player's Ruse by Hilari Bell
My rating: 5 of 5 stars

This book has been my favorite of the series so far, for two reasons.

The first, because the introduction of Rosamund, even if she does seem flippant at times, breaks up the monotony of maleness between Michael and Fisk. Plus, I love that Rosamund proves the boys wrong about what they speculate will happen if she's left to her own devices - which made me realize just how dependent I am on Michael and Fisk's perceptions in order to even see this world.

The second reason, the mystery in a book geared for kids is difficult enough to give adults a hard time figuring everything out. One of the things I love about Bell's writing is her ability to lead readers down a stereotypical fantasy/mystery road that makes us expect a cliche ending, only to find a twist or two thrown in the works that deviates the plot from what we expect. That's why I look forward to reading the next book in this series.