Hiram Grange and the Digital Eucharist

Hiram Grange and the Digital Eucharist by Robert Davies is the third installment of  a new series of novellas, the Hiram Grange Misadventures, written by different authors for Shroud Publishing:


Welcome to the scandalous misadventures of scurrilous boozer and malcontent, Hiram Grange. Though afflicted with a laundry list of dysfunctions, addictions and odd predilections, Hiram Grange stands toe to toe (and sometimes toe to tentacle) with the black-hearted denizens of the Abyss and dispenses justice with the help of his antiquated Webley revolver and Pritchard bayonet.  A five-part series. Cover and illustrations by Malcolm McClinton, and original woodcut prints by Danny Evarts.

Available at Amazon, Barnes and Noble, BooksAMillion, and AbeBooks. The series is available in a five-book set: Hiram Grange Volume 1 (5 book Set).

See my reviews of previous installments: 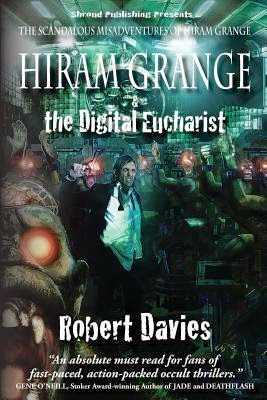 From its global headquarters in Boston, the mysterious Occlusionist Movement is preparing to control the world with its Digital Eucharist, while in the serpentine bowels of the city an ancient demon is unleashed, eager for revenge against the man who imprisoned it years ago--Hiram Grange!

Hiram Grange and the Digital Eucharist by Robert Davies
My rating: 4 of 5 stars

This third installment of the Hiram Grange series is a hard book to review without giving away spoilers.

There were fewer drug references than I expected, given everything Hiram went through in the last book. In this installment, drugs save Hiram like penicillin to an infection.

The plot is fast-paced and the chronology is twisted up, emphasizing cause and direct effect of the action-based plot. This is also the goriest book so far - I'm not complaining, just putting the fact out there. I'm eager to read the next installment - I want to know what's going to happen to Grange in the long-run.