Drug of Choice by Michael Crichton is available at Amazon and Barnes and Noble. 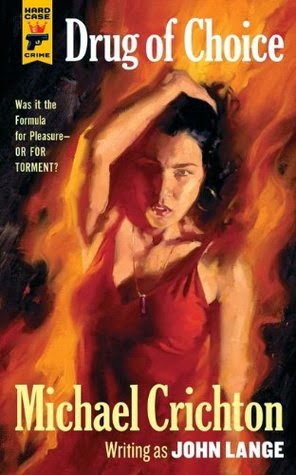 On a secret island in the Caribbean, bioengineers have devised
a vacation resort like no other, promising the ultimate escape.

But when Dr. Roger Clark investigates, he discovers the dark
secret of Eden Island and of Advance Biosystems, the shadowy corporation underwriting it...

Drug of Choice by Michael Crichton
My rating: 3 of 5 stars

A quick read with fast-paced action based on a fear still prevalent today - doctors, and the conglomerations they hide behind, who care more about money and power than the humans they treat.

Crichton was one of those authors/screenwriters who had the ability to scare the bah-jeezus out of me which made it interesting to see his early work and how he evolved as a writer. I thought the story held up well in the decades that have passed since this book was first written. The one downside is that the book has become a pot-boiler in today's time and it's easy to guess what happens next. That statement probably wouldn't have held up back in the seventies, when this book was initially released.

I received a free copy of this book from Goodreads First Reads in exchange for a review.