Blood Royal by Eric Jager is available at Amazon and Barnes and Noble. 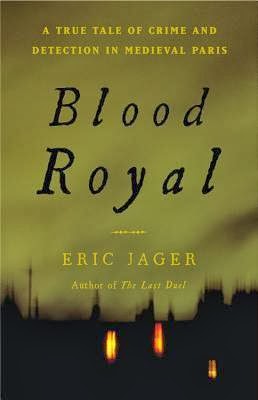 A riveting true story of murder and detection in 15th-century Paris, by one of the most brilliant medievalists of his generation.

On a chilly November night in 1407, Louis of Orleans was murdered by a band of masked men. The crime stunned and paralyzed France since Louis had often ruled in place of his brother King Charles, who had gone mad. As panic seized Paris, an investigation began. In charge was the Provost of Paris, Guillaume de Tignonville, the city's chief law enforcement officer--and one of history's first detectives. As de Tignonville began to investigate, he realized that his hunt for the truth was much more dangerous than he ever could have imagined.

A rich portrait of a distant world, BLOOD ROYAL is a gripping story of conspiracy, crime and an increasingly desperate hunt for the truth. And in Guillaume de Tignonville, we have an unforgettable detective for the ages, a classic gumshoe for a cobblestoned era.

Blood Royal: A True Tale of Crime and Detection in Medieval Paris by Eric Jager
My rating: 4 of 5 stars

Guillaume de Tignonville investigated the death of Louis I of Orléans, the younger brother of the mad King Charles VI's, who was murdered in the streets of Paris. The book wound up being less about the murder, focusing instead on how Louis' death sent France into civil war in the 15th-century.

The book is written like a history textbook, which some people may find monotonous but will appeal to history lovers like me. The book is heavily cited with a well-organized bibliography for further research.

The book briefly touches on Charles' illness by describing the symptoms and stating that he may have suffered from schizophrenia, which is what most scholars thought until the last century, when porphyria was documented and diagnosed in Charles' descendants. I wish this subject had been broached; then again, this book wasn't about Charles. I mention this because it's the only thing that irritated me.

I loved the gruesome details that were given about some of the battles that followed in the wake of Louis' death. They broke that traditional textbook mold by not shying away from the horrific aspects of war.

I requested a free copy of this book in exchange for a review from NetGalley.