Sinful Folk by Ned Hayes will be released on January 22, 2014 and is available for pre-order at Amazon and Barnes and Noble. 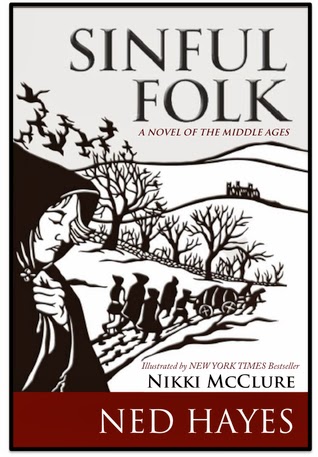 A terrible loss. A desperate journey.
A mother seeks the truth.

In December of the year 1377, five children were burned to death in a suspicious house fire. A small band of villagers traveled 200 miles across England in midwinter to demand justice for their children’s deaths.

Sinful Folk is the story of this treacherous journey as seen by Mear, a former nun who has lived for a decade disguised as a mute man, raising her son quietly in this isolated village.

For years, she has concealed herself and all her secrets. But in this journey, she will find the strength to claim the promise of her past and find a new future. Mear begins her journey in terror and heartache, and ends in triumph and redemption.

Sinful Folk by Ned Hayes
My rating: 3 of 5 stars

This story was inspired by true events and draws on real historical figures, such as Edward the Black Prince, son of the English King Edward III, but relies heavily on Everyman Tales and Geoffrey Chaucer's The Canterbury Tales to shape the setting and plot.

The literary techniques employed in this story are impressive, but the story itself didn't grab me and pull me into the book. There's a strong wishy-washy love angle with an interesting twist at the end.

The narrative meanders back and forth in time, often reiterating back-story to move the plot forward. The dull repetition is broken sporadically by shocking events - some inspired by the factual while others are based on stories passed around in the 14th-century (i.e. the Everyman Tales and The Canterbury Tales).

I received a free copy of this book from NetGalley in exchange for a review.