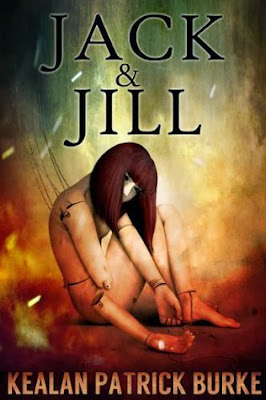 When they were kids, Gillian and John used to visit the local cemetery every Sunday after church. It was a curious place for children to frequent, but they had their reasons. The main attraction was the lofty hill that separated the cemetery from the elementary school, and the act of tumbling down it like Jack and Jill was a ritualistic escape from the abuse they were suffering at their father's hands.

It was an escape that lasted only until John's tragic death.

Now, Gillian is all grown up. Married with two children, she has managed over the years to force the trauma of her nightmarish childhood into the darkest recesses of her mind.

But lately there are dreams, and in them Gillian sees impossibly vivid reenactments of the horrors she endured as a child. Nightly, she sees John die all over again, only not in the way she remembers.

And something else is in those dreams, stalking her, a terrible figure with wire-hanger hands and a plastic bag wrapped around its rotten face. A monster whose reach starts to extend beyond the boundaries of sleep into the waking world, threatening everything Gillian holds dear.


A monster she once called Daddy.

Jack & Jill by Kealan Patrick Burke
My rating: 5 of 5 stars

I received a free advanced copy of this book in exchange for a review. I admit, I'm biased when it comes to Kealan Patrick Burke. He's always hooked me - probably because he sometimes makes me look up new words -like stevedore, which was used in this story- and I'm favorably inclined to wo/men who make me look up words.

This splatter-punk/horror novella messed with me because of my own personal issues with domestic violence. Mr. Burke captures how it feels to be in an abusive environment while also depicting how an individual can go from being the abused to the abuser without noticing the line drawn between the two. This story played on those fears in me.

The ending was reassuring in that I could tell myself that my life has never been this crazy. I can't guarantee that everyone will have nightmares after reading this story, but I did. Not many horror stories do that to me.