Shopocalypse by David Gullen is available at Amazon and Barnes and Noble. 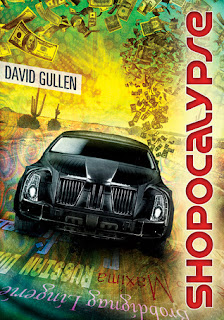 Novik and Josie have a lot of catching up to do. After two years in jail she has waited for his release and never ever wants him to go back in again. In the America of the near-future, being a decent person can cost you dearly.
A stress-filled encounter with some “Old-fashioned Boys” at a chain eatery turns their best of intentions upside-down: they’re now on the run and in possession of a super-hot sentient muscle car and 190 million dollars, covered with a potent psychoactive powder.

Shopocalypse by David Gullen
My rating: 4 of 5 stars

Dystopian/speculative fiction reminiscent of bizarro and splatter-punk in its over-the-top shock nature.

This book presents a world that shows us a outlandish-but-potential future based on current events. Half the continent is overran by Canadian trees creeping north to the pole while half of America is desert and Permanent Larry, the hurricane that never ends, batters Nu-Orleans and what's left of the Gulf of Mexico. Capitalism rules the world but the bad guys are so obviously bad that only some of them bother to call themselves politicians, the rest are mobsters and CEOs. The majority of the population is brainwashed into not caring by government-condoned drugs and encouraged consumerism. Sound familiar?

Normally, I don't like books with sex in them because the sex becomes redundant. This book has a sex scene that I have never seen anywhere else. The scene also offered up the line that made me laugh the most: (paraphrased) "I don't want penetration but you can fist me if you like." (I kind of want that printed on a shirt).

If I have to read sex, that's how I want to read it - strange, disturbed, and not seen elsewhere in the literary canon.