I've pre-ordered a copy of Smoke and Fears, a short story available for Nook on November 26, 2013 but available at Amazon now. 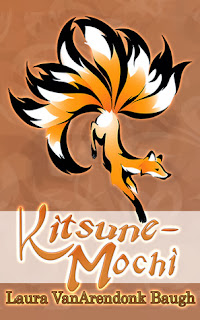 Sequel to the award-winning Kitsune-Tsuki.

Following the search for the shape-shifting kitsune, onmyouji Tsurugu no Kiyomori serves Naka no Yoritomo and his new wife Kaede, protecting their household from the supernatural and warning of more mundane threats.

Elsewhere, a murder is committed in Naka's name, and an exiled onmyouji determines to wreak his own justice by destroying Naka no Yoritomo and his bride. just as word comes that an immensely powerful youkai is moving, coming to Kaede.

Now Tsurugu and his allies must protect his daimyou‘s house from a dangerous rival without revealing their own treacherous secrets — or they die by the hands of their friends instead of their enemies.

Kitsune-Mochi by Laura VanArendonk Baugh
My rating: 4 of 5 stars

Kitsune-Mochi picks up right where Kitsune-Tsuki left off in Not-Japan, a fictional world based on Japanese folklore.

The sequel is more action-driven, while the first book is mystery-themed. There's some romance here too - and it's not cloying or inappropriate for children.

Japanese mythology isn't my strong point so Not-Japan is a refreshing world introducing supernatural creatures that I know little or nothing about, providing a nice change of pace from westernized creatures.

The Japanese terms continue to throw me - I have problems keeping them straight and, because of my lack of experience with Japanese stories, I have no idea how to pronounce most of them. There is a glossary for the terms and a nifty appendix with more information about some of the creatures featured at the end of the book.

I received a free copy of this book in exchange for review.