I picked up this book, Specters in Coal Dust edited by Michael Knost, a while back at a book-signing and it's been waiting (along with several other books) for me to have an opening in my schedule. I had to get sick (bronchitis) to find time but at least I read it at the right time of year.

Available from Woodland Press, Amazon, and Barnes and Noble. 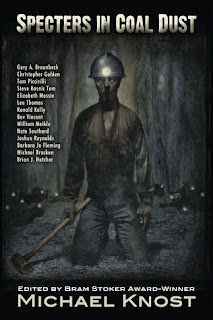 The depth and darkness of the coalmine has been described as the blackest of black, the loneliest of lonely, and the coldest of c-o-l-d. American miners have tunneled the earth’s bowels for the black diamond since the early 1700s, and unexplained tales of ghosts and specters have made their way to the surface with nearly every load of anthracite.

“Then in the trees on the mountain-side of the property, she could hear a breeze picking up, but after only a few seconds she knew it wasn’t wind at all, but breathing, difficult breathing, from lungs that never could get enough air. Dark figures appeared in the spaces between scattered trees, carrying lanterns that did nothing to illuminate them.” — from Steve Rasnic Tem’s "Old Men on Porches."

An eerie collection of coal camp stories from some of the horror genre’s finest storytellers, Specters in Coal Dust will leave you cold, lonely, and gasping for air.

Specters In Coal Dust by Michael Knost
My rating: 5 of 5 stars

I read a lot of books for free in exchange for reviews. I bought this book because I trust Knost to deliver up some great stories by authors I will probably want to read more of and, as usual, he didn't fail.

I love a good ghost story and this one has several. This collection will satiate many folk - those who love ghost stories and those who love Appalachian literature. There's a bonus for those who grew up in coal mining families and know the backgrounds of these stories intimately; this allows these tales to draw on some powerful emotions.

My favorite story was Holding the Line by Tom Piccirilli - I didn't guess the ending (but I feel like I should have). It's been a while since an author threw me like that - the story revolves around a mine strike and, as a coal-miner's daughter, I grew up hearing similar stories - the details of the strike drew me into the tale and I forgot what I was reading until the end was revealed. Bravo, Piccirilli, bravo.