The Vegan Stoner Cookbook, by Sarah Conrique and Graham I. Haynes will be available on September 3rd and is available for pre-order from Amazon, BooksAMillion, and Barnes and Noble. 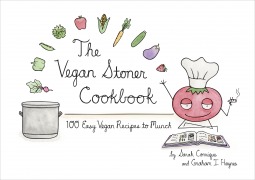 A collection of vegan recipes so simple to make that even a stoner could prepare them, this highly illustrated cookbook from the creators of The Vegan Stoner food blog proves that going vegan can be fun, cheap, and easy.

Cooking vegan doesn't have to be hard! This irreverent take on veganism proves that beginners and slackers alike can whip together yummy, filling meals with just a few ingredients and minimal time and effort. Foolproof recipes for breakfast, lunch, dinner, and muchies include Mean Green Smoothies, Aspara-Guy Sushi, Bahnwiches, Animal Cookies, Churro Chips, and more.

The Vegan Stoner Cookbook: How to Cook Cheap, Fast, and Vegan by Sara Conrique
My rating: 3 of 5 stars

Some of these recipes seemed ludicrous to me -Granola Bowl, for example- because it's something that anyone can figure out while standing in their kitchen. But turn the page and there's a recipe for a vegan version of Hollandaise Benedict and, later on, an interesting version of Cream of 'Shroom Soup, which could be used as a base for many dishes. And there's a couple dishes, like Banana Dog - a cooked banana in a hot dog bun - that I have no interest trying. There's also a couple recipes, like Samosas, that can be easily tweaked into some amazing munchies.

Each dish comes with tips on how to make slight adjustments for use in other recipes. The book also explains how to make some of the ingredients - like tahini and almond milk - so you don't have to buy prepackaged products. These recipes are designed to be quick, for people who don't mind using some prepackaged products like crescent roll dough, pizza dough, and ketchup. Substitutions are easy to make, if you prefer to make your own orange juice or English muffins.

There's an abundance of artwork - each recipe has a real photograph accompanying it but the ingredient list is depicted as an illustration that looks like it was done for a children's picture book. I received a free digital copy of this book in exchange for a review and it was hard to make out some of the ingredients on my Nook (even when I zoomed in). I recommend using this book in print format.