Yeah, it's a little hard to pass up a title like that. That's why I entered the giveaway on LibraryThings for a free copy of Susan Adger's book (and here's the full version of the title), Seashells, Gator Bones, and the Church of Everlasting Liability: Stories from a Small Florida Town in the 1930s.

I admit, I was very nervous after finishing the first two chapters because I disliked the characters so intensely. I didn't want to keep reading about characters I didn't like but I'm glad I stuck with it - the strongest point of this book is its character development and I always appreciate the opportunity to study a technique that's new to me.

This book is available for purchase at Barnes and Noble, Amazon, and Booksamillion. 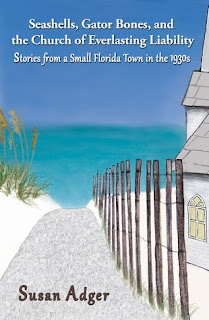 In the 1930s, the fictional town of Toad Springs, Florida, is filled with the adventures and daily whatnots of worthy, down-to-earth folk such as Flavey Stroudamore, owner of a three-legged gator named Precious who also just happens to have a birthmark of Jesus on his side.

Joining Flavey are Buck Blander, pastor of the Church of Everlasting Liability, who honed his preaching skills in prison but doesn’t tell his parishioners, and Sweetie Mooney, whose attempt to run a beauty shop in her aunt’s home fails after tragedies with head lice and henna hair dye.

This lively, heartwarming collection of tales from the Sunshine State will inspire you to smile!

Seashells, Gator Bones, and the Church of Everlasting Liability: Stories from a Small Florida Town in the 1930s by Susan Adger
My rating: 3 of 5 stars

I usually praise books that stay true to dialect but this one drove me bonkers, using "would of" instead of "would've. A lot of work went into keeping the dialect consistent and, to be fair, I come from Appalachia in the modern world and that phrase was drilled out by early teachers (I still use it in speech but to write it...I'm haunted by a memory of a teacher making us write "would've = would have" a hundred times).

The story is set in the 1930s, standing as a testament to the changes in the ways of life from then to now. I can't go into that without giving spoilers but I loved the transition between various character perspectives - it makes the town more realistic. I'm very interested in seeing what Ms. Adger will do with different sets of characters in future books.

I loved the way the story was told, with one character's tale bleeding over into the next character's tale until the entire community is painted in your head. The characters are vivid and well-developed but the plot is anticlimactic in that readers know the fate of the town as soon as we learn of its origins.

Posted by Angie Lisle at 1:11 AM Labels: Reviews