I've always found ornithology fascinating but I've never been able to identify 75% of the birds I encounter. I love birds and garden with them in mind. I also keep a feeder. But that doesn't mean I know jack about birds. If you know what these are...leave a comment.

I'm pretty sure these are young Northern Mockingbirds but I'm not 100% on it.

Two showed up at my house in early spring. They had clean chests and were much slimmer but were rather shy. Then, a few weeks later, four showed up, all with bits of down still fluffing out from their feathers. They were much friendlier than the parents and, as you can see by their size, are quite fond of the feeders in my neighborhood. They are fat compared to the first two who showed up.

They frequently come to my office window, while I'm working, and dance on the gutter of the porch below my window. They bang their wings and make all kinds of racket. Until I go check the feeder and find that it needs filled. They also "dance" when I encounter them outside - I'm pretty sure they are begging for food. They follow me when I take food scraps out.

I love to eat berries and usually have them on hand but sometimes I have to throw some out because of mildew/rot/etc. I always toss them outside for the birds. I managed to catch this shot after throwing out some cherries.

They've backed off a bit since the Blue Jays have moved in - I'm a fan of the Corvidae family so no bitching about the Jays. 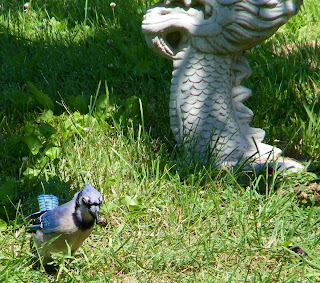 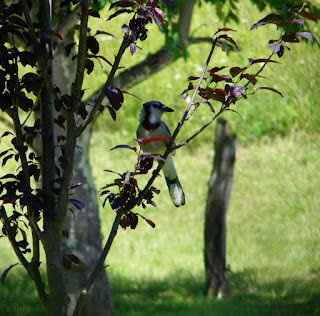 I have several Jays roosting in trees on the hill behind the house and I love watching them when I'm sitting outside. 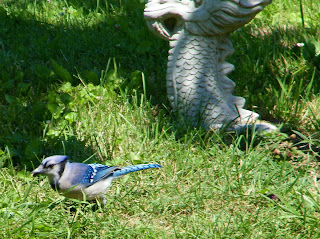 There's no definite way to tell the sex in Blue Jays, not without handling them, so I have no idea if this bird was male or female.

Both adult males and females produce beautiful blue feathers - if you see one that's gray, it's because the bird is immature.


This little Jay was friendly. He or she let me get within a couple of feet and was totally cool with me taking shots while he or she cleaned up under the feeder.

The Jays don't like it when I walk around on the hill near the trees where they are nesting. I usually respect their wishes. Supposedly, there are ways to tell their sexes apart by their behaviors but I'm not disturbing them to sate my curiosity. It really won't help when I have encounters with them at the feeder. Not unless I learn to identify them by individual markings and, let's face it, I'm not that good with birds.

I've heard woodpeckers in the neighborhood since I moved in but I never see them. They always sound like they are up on the hillsides, their knocking echoes through the neighborhood. 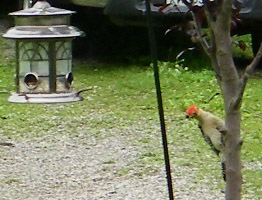 Now, I know almost nothing about woodpeckers. I never saw or heard them where I grew up so these fellows are fairly new to me.

This year TWO decided to come down to my feeder.

I've been trying to catch them both on camera for weeks but they are both very shy. They fly away if they see me through the kitchen window. And once they fly away, they won't come back for a few hours.

Both come down to the feeder at the same time, but they don't feed together. One hangs out on the corner of the garage while the other swoops down and grabs food. Then, they swap spots. 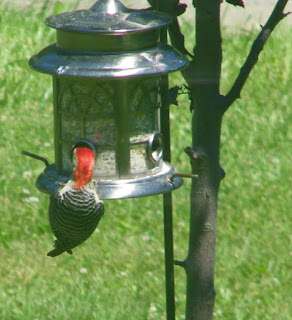 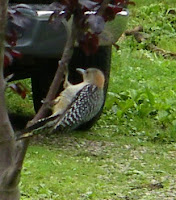 They are more likely to visit in the morning through afternoon. They usually clear out by evening.

And I think, though I'm not positive, that these two little guys are Red-bellied Woodpeckers because they have orange patches on their bellies, which you can kind of see in the picture to the left.

Females are marked with red on the nape of their neck and they have a small red spot above their beak. Males are red from beak to nape. I've noticed that the female's color is duller than the male's bright red head. I've kept them sorted in the photos above - the female is on left while the male is on the right.


This is the male in the photos below.