The Lightness of Dust (The Meronymy, #1)

I just finished the first book of The Meronymy Series, The Lightness of Dust, by M. L. Weaver, which is available at Barnes and Noble, Amazon, and Smashwords. 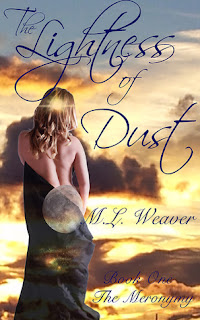 In ancient Anatolia, a young healer fights to reunite with her true love despite her father's desire to profit from her gift.

In Depression-era Seattle, the caretaker of the Persephone Music Hall finds inspiration for his art in the arms of a beautiful foreign violinist.

A university professor in modern-day California struggles to keep his lab and his marriage from the clutches of his enthusiastic new grad student.

A mysterious thread draws these lives together across the span of history and summons one of them toward an unspeakable fate. Follow the thread as mortal cares scatter with The Lightness of Dust.

The Lightness of Dust by M.L. Weaver
My rating: 2 of 5 stars

The story is told through three thread lines, each with it's own cast of characters in different settings. It took a while for the threads to weave together but this prevented me from guessing where the story was headed.

I enjoyed the supernatural twist that ties all the threads together but the prose is a little too poetic for me and every character is dramatic, a bit soap-opera in a fantasy scenario.