Blamires' A Time of Myths


I won a free copy of A Time of Myths by Chris Blamires from LibraryThing. It is available for purchase at Amazon. 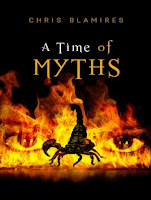 
Woodstock, 1969: the Festival that defined a decade of peace, love and freedom. The paths of five young English students cross – with devastating consequences. Consequences that eventually reach a climax in an isolated Cretan gorge.

Seventeen years later, in the ‘golden age’ of capitalism, dramatic events conspire to reunite the surviving members, necessitating a perilous return to Greece and to a tiny Greek island, as dangerous secrets and self-deceptions are at last forced into the glaring light…

Steeped in the folklore of the 20th century, A Time of Myths is not solely a historical mystery adventure: it seeks also to examine who we are, and how far we are in control of our actions – and even of our lives.


A Time of Myths by Chris Blamires
My rating: 3 of 5 stars

I didn't like the beginning of this book but I pressed on because I received a free copy in exchange for a review.

The writing itself isn't bad and the story does have substance - well plotted and developed themes that capture the essence of the 60s and the decade's continued effects on the world up until the 80s, with many implications pointing to events happening today. The mystery was drawn out through the entire book, with readers guessing pieces at a time. I knew what was in store for Jo, but it was a decoy throwing me off the scent. I'm not giving away anything else; just keep in mind that there is another plot thread being woven that's really easy to overlook.


The story started slowly and didn't hook me until right before page 100. All the info given in the first 100-pages is necessary to the story but could be repositioned to keep people reading beyond those first few pages.

There are a couple of editing issues - I don't know if they are from ePub formatting or if they're intentional. The overuse of the ellipses drove me bonkers and I suspect it's an issue with digital versions.