Last night, I finished reading The Clearing by Thomas Rydder.

I mentioned this in my review but I want to reiterate because I think this is a pretty swell thing for Mr. Rydder to do: 25% of the royalties from this book will be donated to the Feline Freedom Coalition, a non-profit organization rescuing feral cats in the Charleston, South Carolina area. You can read more about it here. May both Mr. Rydder and the FFC be blessed in this endeavor.

This book is available for purchase from Smashwords and Amazon and Barnes and Noble (coming soon to other eBook retailers). 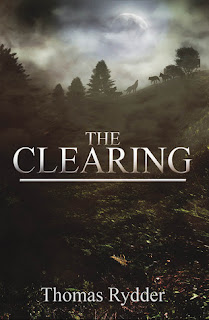 
After twenty years in the Marine Corps, Major Frank Cutlip comes home to the quiet hills of his beloved Pennsylvania to take up a new life as the sheriff of Allegheny County.

Professor Beth Lowe took up a post at Paxton University because she became enamored with western Pennsylvania’s charms, a more enduring love than she thought she would ever feel for a man.

When Beth’s dog is savaged by wolves, their peaceful lives are shattered, and their fates entwined. On the brink of death, the dog not only survives but grows larger… and more vicious. A thousand-year cycle of carnage is reaching its climax once more, and the peaceful wooded hills will soon be smeared with blood.

Sheriff Cutlip leads his community in a hunt for the hidden terror, but then his own brother is bitten, his blood corrupted by the ancient evil. The sheriff must confront terrible choices, and he can’t do so alone.

The Clearing — a novel of ordinary people thrown together in extraordinary circumstances.

The Clearing by Thomas Rydder
My rating: 3 of 5 stars

A quick read with lots of action. There's some romance too. All the sex is implied (I'm not complaining), but Rydder doesn't skimp on violence (again, not complaining). It's also worth noting that Mr. Rydder is donating 25% of this book's royalties to the Feline Freedom Coalition.

The writing is a little choppy but it doesn't detract from the story. This book is reminiscent of a horror flick you'd take a date to on sultry Friday/Saturday nights.

The story relies heavily on pre-Christian ideas about werewolves, which was a nice change from the norm. Rydder's concept about werewolves is one I haven't seen a million times before, but I was able to guess what would happen next because of character POV changes that gave away too much information. I would have liked the story more if it was told from one character's POV, preferably Frank's because Beth appears to be unstable. When we first meet her, she's pretty stellar - raising her dead sister's kid and working as an Etymologist at a local school; then, we see her from Frank's POV and she appears bat-crap crazy. She was traumatized from stuff that happens in the story but I kind of want to read the sequel just so I can find out if she's really nuts or not. And if her method of catching men is how one does it...well, turns out I've been doing it wrong.