I didn't fill my bird feeders as often this winter, because last year I kept them stocked and the birds neglected the hollies. I have tried to sprout the stubborn little seeds on my own (with homemade solutions) and have had little success. I'm reliant on the birds to do the job for me (their digestive tracts break down the seed coating so water gets in and the seeds sprout - a job that requires sulfuric acid, if I want to do it without birds and no thanks. As clumsy as I am, I'd wind up like The Joker or something sketchy like that).

The hollies are starting to look a little picked through so I decided to clean out the feeders and refill them. My first discovery was the little buds on the plum tree that I named Prunella (she's actually intersex, with both male and female parts but I refer to her in the feminine because of the name I gave her, which was done in total whimsy). 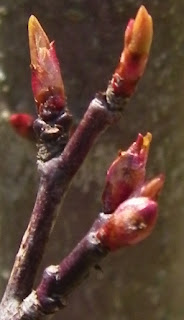 I found Prunella in the nursery at a local chain store. She'd been severely neglected and I talked the store manager into giving me a discount on her, with no return policy (I paid a third of her original price).

I looked Prunella over before I made the offer and was pretty sure that the majority of the damage was dehydration so I brought the plum tree to my house and soaked her, planted her, made sure she got plenty of water. She did fine for a few weeks.

And then...dum dum dum...we had that really fucked up storm last summer that knocked power out all over the state of West Virginia. That storm also stripped every leaf from Prunella and she didn't she didn't put out anymore for the rest of the summer. I worried that she wasn't going to pull through but kept an eye on her branches, most of which stayed limber and green. So this was a pleasant surprise to find when I took the bird feeder out to hang near her.

Started looking around and realized that my ornamental peach tree is getting ready to flower.

See that lovely green tree in the background of these two images? That's a male holly (hollies are not hermaphrodites). Ain't he gorgeous?

I really appreciate the hollies in the winter, when everything else is dormant. I need about twenty-five more sprouts (come on birds, you can do it!) so I can start a holly hedge between the neighbor's lot and mine within the next five years (it will take three to five years before my little holly sprouts are ready to plant outside in a hedgerow).


Then, I found this, a spring crocus (Crocus vernus) called a "Pickwick."The previous owners planted them and I did some major digging in that flower bed last year so I guess I woke this one up. And the following is one of my Asiatic Lilies but I don't know which type of lily this is. This is in a huge pot of bulbs I have collected over the years. It started with Stargazers, which are among my favorite lilies, but I have added several lilies that are all similar in color to Stargazers (for variety). I didn't keep track of them very well but I do know that they are all Asiatics (one of the few pollens I'm not allergic to so I love them for their smell).

I do a lot of my bulbs in planters and several of my lily pots have green tips just starting to poke through the dirt. This one has a head-start on the rest of them. 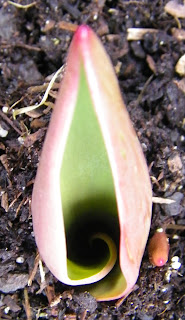