Robert B. Warren's Murder on Olympus

Murder on Olympus, the first book in the Plato Jones series written by Robert B. Warren, will be released on April 11, 2013. It is available for preorder at Barnes and Noble and Amazon. 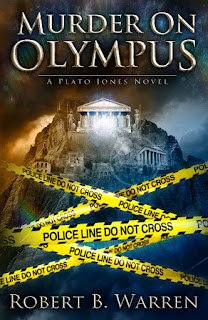 At first glance, the Gods of Olympus are as different from one another as salt is from sugar. Despite their bickering, they share a universal bond, a thread of commonality that unites them.

After a stint with the Olympic Bureau of Investigation, Plato Jones is through with the Gods and their political games. Against his protests, he's drawn into a murder investigation, where the murderer's targets are the Gods themselves.

Plato has cracked some tough cases: exposing cheating spouses, capturing treasonous heretics, hunting three-headed dogs. But this time he’s in over his head. How can he solve a crime that’s impossible to commit? And what chance does Plato—a mere mortal—have against something powerful enough to kill a God?

Murder on Olympus by Robert B. Warren
My rating: 4 of 5 stars

A murder-mystery that reads like a pulp detective novel. Well-written Noir style prose creates fast-paced action. The main character - Plato Jones, a divorced private investigator - is based on the hero archetype, giving this book/series a strong appeal for male audiences.

There is a slight paranormal/fantasy twist to the genre - the clients, victims, and suspects are Greek gods. The gods have adapted to life in the modern world - Aphrodite is a socialite, Ares has become a rock star. It will be interesting to see where Mr. Warren takes this concept over the course of the series. I look forward to reading the sequel.

I received a free advanced copy of this book in exchange for review. I hadn't heard of the independent publisher, Dragonfairy Press, before this book, but I will be hunting down more of their publications.