Bob Larranaga sent me a copy of his book, The Reckoning, Saga of a Civil War Blockade Runner. It is available for purchase at Amazon and Barnes and Noble. 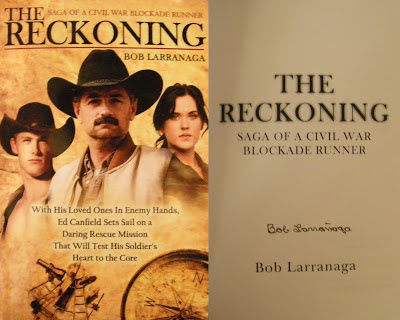 
It’s 1861. Abraham Lincoln has just won the presidency with less than 40 percent of the popular vote. The South is threatening all out war.

In Florida, ex-army sharpshooter, Ed Canfield, and his hotheaded son, Jesse, are already at "war" with each other. Ed has barred Jesse from joining the rebel army because Ed is haunted by nightmares about what he saw and did during the Mexican-American War. The highly decorated veteran suffers from what doctors in the Civil War era called “soldiers’ heart” and what we now call Post Traumatic Stress Disorder. Young Jesse calls it being chicken-hearted, and father and son soon come to blows.

But, when a Yankee warship attacks their harbor, Ed and Jesse must take up arms. In a daring escape, the blockade runners dodge the Yankee shelling and head for the “graveyard of the sea” with its deadly shoals, smugglers, cutthroats and spies. They fight their way down the gulf coast searching for a refugee camp where Ed hopes his girl friend, Maureen, has found safety. But as they enter the steaming Everglades, the deadliest foe of all strikes.

Based in part on the January 7, 1862 Union naval attack on Cedar Keys, Florida, this story is rich in historic details, yet the battle scenes read like dispatches from today's front lines. We see the heart-pounding action through the eyes of Ed Canfield as he struggles with his PTSD and whether to answer the call of duty one more time. The story barrels along toward an explosive climax in which Ed must rely on nothing more than dead reckoning in an attempt to rescue Maureen, Jesse and the other townspeople.

The Reckoning: Saga of a Civil War Blockade Runner by Bob Larranaga
My rating: 3 of 5 stars

Action-packed plot that is reminiscent of Wild West tales, set on Florida's Gulf Coast still haunted by pirates during the American Civil War. The main character, Ed Canfield, is a veteran of the Mexican-American War who suffers from "soldier's heart" (Post Traumatic Stress Disorder) when the Civil War breaks out and Ed's home is attacked, forcing him to fight once again for the people he loves.

A historical-romance about the South without the stereotypical characters like the "Southern Belle" found among bodice-rippers. The emphasis is on how Ed's PTSD has, and continues to, affect his family (you will not find erotica here).

The narrative mode changes occasionally, especially in the beginning of the book, when second-person narrative is used to move quickly through the war details occurring in the background. It's a little disjointed but it reminded me strongly of Treasure Island by Robert Louis Stevenson and added an air of piracy without ever using the word, pirate.

Some of the background characters seem to fall flat. I suffer from post-trauma too (not the "soldier's heart" kind) and know that the biggest obstacles are usually in my own mind. This use of background characters read as intentional character development showing how Ed's past continues to interfere with present relationships.

There is also a reoccurring religious theme regarding Christianity and, even though I'm an eclectic pagan, I loved the use of this theme. Mr. Larranaga accurately depicts how religion - in this case, Christianity - can be used to justify the means in both good and bad ways. It also helped to illustrate how everyone is, to some extent, stuck in their own heads.