What I'm getting ready to read.

Okay, so I'm lazy (and sick with a head cold). I've been working my arse off, trying to catch up from the time off I had to take for surgery, but you know how that goes. Mark one thing off the to-do list, add fifteen more.

I wanted to post what I will be reviewing over the next few days (not necessarily in this order):

The Mountain Place of Knowledge by Marshall Chamberlain

A flash of mysterious blue light brings death to a U.N. official searching for a secret entrance to the inside of a Belizean mountain. Two U.N. scientists investigate, coming into possession of a scepter wielding miraculous powers, uncovering a blue-light source of destruction, and finding the hidden entrance. Inside strange sculpted caverns, bizarre mental prodding guides them to shocking experiences. To protect hi-tech secrets, cooperation is required from Belize, the United Nations, NATO, and the United States. But one nation determines the mountain poses a threat to world order and will take great risks to neutralize the danger.

The Last Prince of Atlantis by Leonard Clifton 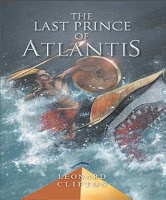 Allen King is a 15 year old African American male teenager living in a blue collar family in Miami, Florida. Allen immediately discovers after finding a crystal necklace that he's an alien hybrid prince of ancient royalty. Suddenly things change as this shy teenager becomes a strong leader by having the power of telepathy and teleportation besides communicating with sea animals. Allen is aided by a beautiful young Greek goddess, two orphan teens and his boisterous uncle. Together while keeping the earth safe they fi ght Allen's immortal enemies as they try to restore his kingdom, the lost city of Atlantis.


House of Shadows, the first in a series called The Breed Wars, by Walter Spence.

Befriended as a young teenager by a beautiful and mysterious benefactress, Eugene Evans believes the downward trajectory of his white trash existence has finally been arrested and his life turned around. Then, after he becomes a man, he is confronted by a horrifying and unavoidable choice between two unacceptable options.

But it doesn't stop there.

For once his decision has been made, and the consequences accepted, he finds himself in a new and terrifying reality threatening all that he loves, where his first wrong choice will be his last. . . .

Haha. Being from West Virginia, anything with the words "the trajectory of white trash" grabs my attention. Especially when combined with "The Breed Wars." Does anyone else hear Dueling Banjos or is that just in my head?