Author Abby Slovin has generously agreed to a giveaway! The winner will receive a free digital copy of her book, Letters in Cardboard Boxes!  You can see my review here and don't forget to enter the giveaway at the bottom of this post! 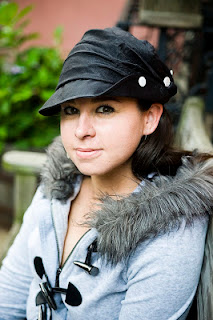 Winner of the First Horizon Award for superior work by a debut writer, Letters In Cardboard Boxes tells the story of an eccentric grandmother and her granddaughter alongside a series of fantastical letters they once exchanged. Their letters once traversed the East River to help Parker escape the loneliness of a childhood without her globe-trekking parents and communicate during her turbulent teenage years. Now, nearly a decade later, Parker begins to rediscover this letter writing tradition, as well as the family’s untold stories and, unexpectedly, letters from her grandmother’s own youth that paint a very different portrait of the woman who raised her.

Letters carries us through the universally-shared experience of loss and the process of coping with life’s unexpected twists and turns. Through unusual and bold characters, the story moves through some of its heavier themes with honesty and humor.

Tell us a little bit about yourself. What do you like to do when you aren’t writing? What kind of music do you listen to? Do you have any other artistic pursuits outside of writing?

Well, I’m a native New Yorker. I live in Jersey City with a wonderful husband and our adopted and quirky Pug/Chihuahua mix. When I'm not writing, I like to spend time outdoors and travel. I listen mostly to classic rock music, but I also enjoy 80s music and contemporary indie. I enjoy a lot of other artistic pursuits outside writing, even though I'm not particularly good at most. I really love photography and collage. And I've been unsuccessfully trying to master gardening my whole life which, if you've accidentally killed as many plants as I have, definitely should be considered an artistic pursuit by anyone who can do it successfully.

How did the book cover for Letters in Cardboard Boxes come about? Who created the image?

I designed the cover myself and staged the photograph that became the cover as well. I wanted to create a scene that was contemplative, something that conveyed a moment where someone seemed to be searching for something in the past. And then, without a person being depicted in the scene, to capture a feeling of an absence or void. The story pushes this idea that photographs, particularly old ones from the past, lose their meaning without someone around to convey that meaning. For example, someone who knows who is in the photo or what was happening in the photo or the sentiment behind the photo. I wanted to convey that loss of meaning, which is a large part of the story of Letters In Cardboard Boxes.

In previous interviews, you have stated that Letters in Cardboard Boxes is a fictional story inspired by the death of your grandmother. Did your grandmother struggle with Alzheimer’s disease and, if not, what inspired you to take the story in that direction?

My grandmother didn't struggle with Alzheimer's, but her death did inspire the moments that led me to write this story. While I was organizing my grandmother's papers after she had passed away, I came across letters written between my grandmother and grandfather during their courtship. I was hit with a lot of emotion at this moment and decided to write a story with this theme at its core, of finding someone's belongings after they have passed, and wanted to depict the sense of loss that accompanies that sort of a moment. After that, the story basically took on a life of its own.

The majority of this book deals with the five stages of grief. How did you keep yourself from deviating from such a melancholic theme during the writing process?

In a way, I wanted to deviate (at least a little bit) from the prescriptive nature of the theory behind the Five Stages of Grief because rarely do we experience grief in such a linear way. Most of the time, people jump back and forth between these stages; they experience bouts of denial followed by anger and then denial again and so on. But the Five Stages provided a good structure with which to confront this very difficult theme. And, when you have such a profoundly intense experience like grief it can be very useful to have a framework in which to write it.

How much research did you do for Letters in Cardboard Boxes?

I conducted some outside research on the nature of dementia and its warning signs, but the majority of my research involved conversations with people directly affected by the disease. I didn't want the story to get too medical or scientific. I wanted it to remain an emotional journey, above all. And also, since Parker is the main perspective with which we experience this journey, I didn't feel the need to interject too much research because, in reality, she is very much in the dark about the nature of this disease.

You’ve stated that it took you three years to complete Letters in Cardboard Boxes. What kept you motivated to finish writing the story?

I tried to stay patient above all and not be frustrated by moments in my life when I either didn't have time to write or couldn't find the inspiration. Since writing is not my profession, I had to manage a lot of other day-to-day responsibilities that got in the way of progress. So, I kept myself motivated primarily by accepting that this was the reality and also by keeping myself excited about the storyline and the characters and seeing it through to its end.

Which character(s) do you relate to the most?

I feel a connection to Tanya, particularly her struggle as an old soul in a young person's body. I like her tendency to ask questions and challenge those in her world. She seems to push Parker to be a better person, but in a subtle and very charming way.

The character Tanya seems to have grabbed a lot of people’s attention. Do you plan on telling her story in the future?

I'm always open to new ideas, so even though I hadn't considered telling the story of Tanya (or continuing the story of Tanya where Letters ends) in another work, I would not be opposed to it. Regardless, its always encouraging to hear that I'm creating characters that readers want to hear more about once the story is complete. To me, it means that they're compelling and delivering the kind of intrigue that I'm hoping to create.

What projects are you working on now?

Right now, I'm moving forward with two projects. The first, which will hopefully be my next completed novel, tells the story of an upper-middleclass widower and the unlikely friendship she develops with a psychic. Its called 10:15 On A Tuesday. My second project, called Jack and the Brick Wall, is a humorous account of a recent college graduate searching for work. Excerpts from both of these projects can be found on my website: http://www.abbyslovin.com/other-work/...


Please note, I have surgery scheduled for Friday, September 21. Barring no complications with the surgery, this giveaway is scheduled to end on Monday, September 24, 2012. If something should happen and I'm stuck in the hospital, I will contact the winner as soon as I am able to do so. Thanks for entering and please share with your friends!
a Rafflecopter giveaway
Posted by Angie Lisle at 1:09 PM Labels: Author Interviews/Giveaways

Thanks DJ! (BTW, your name looks nice as Daniel Berry).

This book made me think about Sir Pratchett :-(