The mail delivered Songs for the New Depression by Kergan Edwards-Stout, a 2012 Indie Book Award Winner in the LGBTQ Category. I won a signed copy of this book from Goodreads First Reads. I'm starting this book when I'm on the exercise bike later this afternoon! 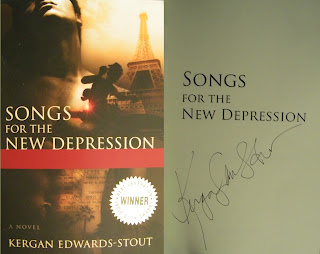 Gabriel Travers knows he's dying; he just can't prove it. Despite his doctor's proclamations to the contrary and rumors of a promising new HIV drug cocktail, all it takes is one glance into the mirror to tell Gabe everything he needs to know. His ass, once the talk of West Hollywood, now looks suspiciously like a Shar-Pei, prompting even more talk around town.

Back in his 20's, life had been so easy. Caught up in the 1980's world of LOVE! MONEY! SEX!, Gabe thought he'd have it all. But every effort to better himself ended in self-sabotage, and every attempt at love left him with only a fake number, scrawled on a realtor's notepad.

The only happiness he could remember was in high school, where he'd met Keith, his first love. Only Keith had recognized the goodness within, and knew of the brutal attack Gabe had faced, the effects of which still rule his life today.

Now almost 40, and with the clock ticking, Gabe begins to finally peel back the layers and tackle his demons - with a little help from the music of the Divine Miss M and his mom's new wife, a country music-loving priest.

Songs for the New Depression is available for purchase at Barnes and Noble and Amazon.