I'm a HUGE fan of bats. A few years ago, when I lived in VA, I saved a juvenile Common Brown Bat that had most likely been hit by a car and was suffering from a bat's version of whiplash. I took him to Bat World NoVa where he was rehabilitated and later re-released into the wild.

Bat World is one of my favorite organizations so take a minute to check them out.

My house is a 160-year old Carpenter Gothic that had bats in the attic when I moved into it. Remodeling has scared them from the attic, but the sonar rodent deterrents didn't make it back to the attic this spring so now, I have bats roosting under the siding on the third floor of my house.

Oh, by the way, those sonar kits that you plug into the wall to deter rodents from coming into your house totally work on relocating bats from places you don't want them without having to harm or kill any of the bats.

And trust me, you don't want to kill these guys. Bats can eat up to 1,500 insects a night - and many of those insects are mosquitoes that can carry diseases like HIV, Hepatitis, Influenza, West Nile Virus, and so forth.


Bats are our friends. 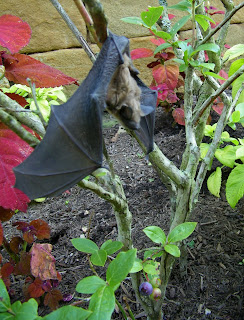 Basically, my house is a bat nursery right now. The sonar deterrents will be put back in place at the end of July, when the birthing season is over for the common brown bat. I don't want to stress out the new moms more than I have to, but they are going to have to move out unless they can find some way of paying me rent.

A couple days ago, I went downstairs at 5 AM to get a drink from the kitchen and found my cats stalking a (male) common brown. I leave a light on in the stairwell at night; insects gravitate to it. Naturally, this is where the bat was flying. Catching him and letting him out without also releasing the stalking cats took a bit of effort but I managed. I didn't take photos because it was 5 AM.

My brain doesn't function at 5 AM.

Then today, late afternoon, I go downstairs and find a (male) common brown hanging from the staircase. The cats hadn't noticed him yet so I grabbed some gloves and paper towels. It was the middle of the bat's nap-time, which means he was easy to catch and and transport (I should probably tell you not to do that without proper training. Oh, and I should mention that I have had some training as a vet tech).

The bat was not at all perturbed by me, not even when I checked to see what sex he was (I don't think he actually woke up until we got outside).

After my experiences with the first bat in VA (and his ability to recognize me as the water-and-meal-worm bearer), I'm wondering if maybe the bat I removed today is isn't the same bat I removed earlier this week. This had better not become a trend. 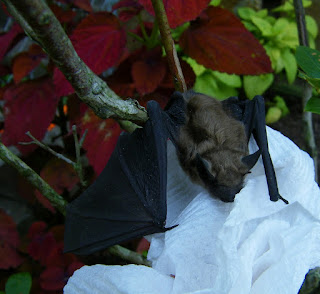 This is me trying to put him on my blueberry bush. This is the bat releasing that he's not asleep and dreaming ("holy shit, that's a real woman").

The blueberry bushes are right below one of the areas where I know the bats are roosting (I have to clean up after them). This bat wasn't crazy about the bushes, so he decided to hide in the mulch under the Coleus. 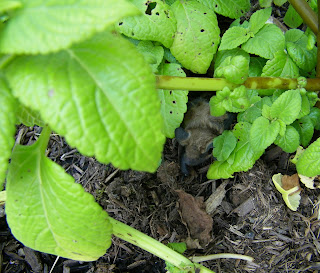 He was gone when I went out to water. Maybe this time it's for good.

Posted by Angie Lisle at 11:07 PM Labels: My Garden

Love the pics you were able to get of him.

These little guys have gotten such a bad reputation over the years, with no substantiation. First off, the are adorable. Second, they play a huge vital role in the ecosystem. Not to mention, they are just downright cool to watch.

Guess it is definitely time to start researching on where to buy (or how to build) bat boxes!

Posting this here - a comment elsewhere warned about bats transmitting rabies (which is true) so I'm including my response:

Thank you for reminding me that not all my readers have certifications. I put the bit in there about not handling animals unless you were trained to do so and provided contact info to people who can hook you up with someone who is; I also provided info on how to safely (and effectively) remove bats without the need to handle them at all via sonar technology. I don't feel like I should have to explain to everyone that you must always exercise caution when working with ANY animal, even those that are domesticated. Many of my readers - at least, the ones I know personally - work with animals (in a professional capacity) and are already aware of this. I'm going to assume that the other readers attracted to my blog are similar in nature; I don't want to talk down to them. That's why the brief reminder and not an explicit detailed accounts of how bats are dangerous (a stereotype that many people already possess without any real knowledge of bats).

That being said, while bats can transmit rabies, it is rare. You are more likely to contract rabies from your pet than a bat. But, having some training as a vet tech (and having briefly handled one before), I know that bats with rabies lose the ability to fly within a few hours of contracting the disease. The first bat was flying around my house - and was eventually cornered by my cats. The second bat (or maybe the same bat) was hanging in a location that could only be reached by flying. He was also asleep, which is normal behavior for bats in the afternoon hours (rabid animals usually break routine). I made the executive call to move the bat before he became unmovable or was hunted by a cat (or dog - my pointer has caught and killed birds; I have to assume that she would also go for a bat). I also wanted to limit the bat's exposure to my pets. Besides rabies, bats can carry fleas, ticks, and lice (and a number of other diseases besides rabies, like SARS and possibly even Ebola) that I don't want my animals or myself exposed to; hence, the sonar deterrents that are usually in place (removed for remodeling).

I should also add that when I mentioned gloves, I double-gloved up. Why? Because bats have thin teeth, very similar to needles. The teeth can easily pierce the thick gloves preferred by hawkers. Even double-gloving isn't completely secure - a bat's teeth can bite through several layers of cloth and, besides the transmission of disease, there's the general fear of infection to worry about with any animal bite. I chose not to include this information in the original post because I fear that making this information available to the general public could encourage people who would otherwise never touch a bat to do so, in the delusion that they are safe with gloves.

Mike, I'd love to get some bat houses hanging in the trees on the hill in the back.