Today, I am embarrassed to admit that I am from West Virginia, where 41% of the votes for the Democratic Primary went to Inmate No. 11593-051. 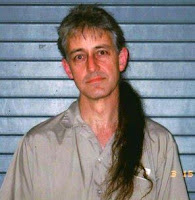 Yes, that is an honest-to-Goddess mullet.

Please do not think that all us West Virginians look that way (honestly, I don't see many mullets here - I saw more when I lived in Virginia).

Yes, he is an inmate at Beaumont Federal Correctional Institution in Texas (emphasis on Texas) for extortion.

(A perk of being eclectic pagan: I can mix religious phrases, if I want to and, because of that beautiful First Amendment in the United States Constitution -not to be confused that unconstitutional "Amendment One" crap that North Carolina has pushed through- no one can tell me that I can't mix religions. And I feel like I have to - someone has to show those uptight pseudo-religious pricks just how easy it is to reconcile different belief systems).

Yes, 41% of the state voted for him. I can honestly swear, by all that is Sacred and Holy, on Mother Earth and Father Sky, I did not vote for this man.

Seriously, I'm worried about how my submissions will be received today. Now, I wish I didn't have to include that pesky contact information that clearly tells everyone where I'm living.
Posted by Angie Lisle at 5:42 PM Labels: 2012, Democratic Primary, Keith Judd, West Virginia