I created a quick graphic to wish my friends a Blessed Beltane. The artwork is by Alphonse Mucha, who is one of my all-time favorite artists. Check out his page on wikipedia if you want more information about him.

The painting, Mai (May), that I borrowed was originally part of a series, The Twelve Months of the Year (also known as "The Twelve Months" or "The Months"), that Mucha did for each month of the year in 1899. 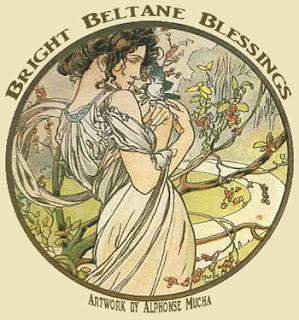 The following is a Pagan-Friendly adaptation of Am Beannachadh Bealltain (The Beltane Blessing), a prayer found in a collection of poems and prayers, the Carmina Gadelica, collected from Scotland by Alexander Carmichael.

Bless, O threefold true and bountiful,
Myself, my spouse, my children.
Bless everything within my dwelling and in my possession,
Bless the kine and crops, the flocks and corn,
From Samhain Eve to Beltane Eve,
With goodly progress and gentle blessing,
From sea to sea, and every river mouth,
From wave to wave, and base of waterfall.

Be the Maiden, Mother, and Crone,
Taking possession of all to me belonging.
Be the Horned God, the Wild Spirit of the Forest,
Protecting me in truth and honor.
Satisfy my soul and shield my loved ones,
Blessing every thing and every one,
All my land and my surroundings.
Great gods who create and bring life to all,
I ask for your blessings on this day of fire.

And, because I'm researching my Welsh-Romnichal heritage, here's a friendly reminder that St. George's Day, also called Ederlezi in Eastern Europe, is usually celebrated on May 6th. My official May celebrations stretch from the eve of May to the 6th.

An old Romany custom was to tie ribbons (symbolic prayers) to a tree (usually designated as Green George - or, as I recognize him, The Green Man or Lord of the Forest) several days in advance of the holiday. The tree is cut down on the 6th and -in a parade of music, dancing, and young maidens decked out in finery, with garlands of flowers in their hair- is ritually sacrificed to a river.

A variation of this custom involved a constructed stick figure, made from cuttings of local plants, tied together and shaped like a man, that was erected in a public space so that ribbons could be tied on it. This construction was also cut down and ritually sacrificed in a river.

Stories claim that Green George symbolizes Saint George and the sacrifice to the river represents Saint George's sacrifices to protect his people. Many of the Christian Roma consider St. George to be their patron saint (but the Roma have no official religion, so beliefs vary across the board).

The ritual is also considered to be symbolic of the Sacred Union between (what I dub) Father Sun  and Mother Earth. It also represents the passing of Spring and the promise of Summer. Celebrations were similar to other European spring holidays - music, dancing, food, lighting and jumping over fires and, being linked with fertility, sex.
Posted by Angie Lisle at 1:08 PM Labels: graphics, religion