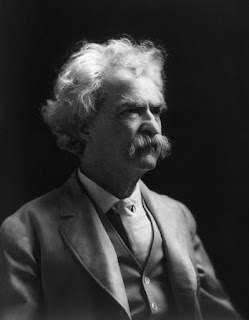 "I could have given my own sect the preference and made everybody a Presbyterian without any trouble, but that would have been to affront a law of human nature: spiritual wants and instincts are as various in the human family as are physical appetites, complexions, and features, and a man is only at his best, morally, when he is equipped with the religious garment whose color and shape and size most nicely accommodate themselves to the spiritual complexion, angularities, and stature of the individual who wears it; and besides I was afraid of a united Church; it makes a mighty power, the mightiest conceivable, and then, when it by and by gets into selfish hands, as it is always bound to do, it means death to human liberty, and paralysis to human thought."

"But that is the way we are made: we don't reason, where we feel; we just feel."

"It being my conviction that any Established Church is an established crime, an established slave-pen. I had no scruples, but was willing to assail it in any way or with any weapon that promised to hurt it."

"Concentration of power in a political machine is bad; and an Established Church is only a political machine; it was invented for that; it is nursed, cradled, preserved for that; it is an enemy to human liberty, and does no good which it could not better do in a split-up and scattered condition. That wasn't law; it wasn't gospel: it was only an opinion - my opinion and I was only a man, one man: so it wasn't worth any more than the Pope's - or any less, for that matter."

"Words realize nothing, vivify nothing to you, unless you have suffered in your own person the thing which the words try to describe."

"I reckon we are all fools. Born so, no doubt."
Posted by Angie Lisle at 1:12 AM Labels: Mark Twain, Quotes