I have not changed the English spelling in these quotes so please don't comment me or email me bitching about the way certain words are spelled. 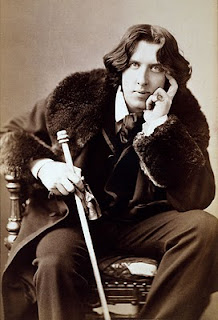 "The moment one sits down to think, one becomes all nose, or all forehead or something horrid. Look at the successful men in any of the learned professions. How perfectly hideous they are! Except, of course, in the Church. But then in the Church they don't think. A bishop keeps on saying at the age of eighty what he was told to say when he was a boy of eighteen, and as a natural consequence he always looks absolutely delightful."

"With an evening coat and a white tie, as you told me once, anybody, even a stockbroker, can gain reputation for being civilised."

"...a peacock in everything but beauty."

"It is a sad thing to think of, but there is no doubt that Genius lasts longer than Beauty. That accounts for the fact that we all take such pains to over-educate ourselves. In the wild struggle for existence, we want to have something that endures, and so we fill our minds with rubbish and facts, in the silly hope of keeping our place. The thoroughly well-informed man is a dreadful thing. It is like a bric-a-brac shop, all monsters and dust, with everything priced above it's proper value."

"Words! Mere words! How terrible they were! How clear, and vivid, and cruel! One could not escape from them. And yet what a subtle magic there was in them! They seemed to be able to give a plastic form to formless things, and to have a music of their own as sweet as that of violin or of lute. Mere words! Was there anything so real as words?"

"Behind every exquisite thing that existed, there was something tragic. Worlds had to be in travail, that the meanest flower might blow..."

"Humanity takes itself too seriously. It is the world's original sin."

"Nowadays people know the price of everything and the value of nothing."

"My dear boy, the people who love only once in their lives are really the shallow people. What they call their loyalty, and their fidelity, I call either the lethargy of custom or their lack of imagination. Faithfulness is to the emotional life what consistency is to the life of the intellect - simply a confession of failures. Faithfulness! I must analyse it some day. The passion for property is in it. There are many things that we would throw away if we were not afraid that others might pick them up."

"Ordinary women never appeal to one's imagination. They are limited to their century. No glamour ever transfigures them. One knows their minds as easily as one knows their bonnets. One can always find them. There is no mystery in any of them. They ride in the Park in the morning, and chatter at tea-parties in the afternoon. They have their stereotyped smile, and their fashionable manner. They are quite obvious." (Ya gotta love a man who hates fad bitches).

"The only artist I have ever known, who are personally delightful, are bad artists. Good artists exist simply in what they make, and consequently are perfectly uninteresting in what they are. A great poet, a really great poet, is the most unpoetical of all creatures. But inferior poets are absolutely fascinating. The worse their rhymes are, the more picturesque they look. The mere fact of having published a book of second-rate sonnets makes a man quite irresistible. He lives the poetry that he cannot write. The others write the poetry that they dare not realise."

"As it was, we always misunderstood ourselves, and rarely understood others."

"I never approve, or disapprove, of anything now. It is an absurd attitude to take towards life. We are not sent into the world to air our moral prejudices."

"One's own life - that is the important thing. As for the lives of one's neighbors, if one wished to be a prig or a Puritan, one can flaunt one's moral views about them, but they are not one's concern."

"We are overcharged for everything nowadays. I should fancy that the real tragedy of the poor is that they can afford nothing but self-denial. Beautiful sins, like beautiful things, are the privilege of the rich."

"I represent to you all the sins you have never had the courage to commit."

"It is the confession, not the priest, that gives us absolution."

"One should absorb the colour of life, but one should never remember its details. Details are always vulgar."

"Conscience makes egotists of us all."

"I cannot help feeling that it is a mistake to think that the passion one feels in creation is ever really shown in the work one creates."

"There were passions in him that would find their terrible outlet, dreams that would make the shadows of their evil real."

"The worship of the sense has often, and with much justice, been decried, men feeling a natural instinct of terror about passions and sensations that seem stronger than themselves, and that they are conscious of sharing with the less highly organised forms of existence. But it appeared to Dorian Gray that the true nature of the sense had never been understood and that they had remained savage and animal merely because the world had sought to starve them into submission or to kill them by pain..."

"It was to teach man to concentrate himself upon the moments of a life that is itself but a moment."

"One's days were too brief to take the burden of another's errors on one's shoulders. Each man lived his own life and paid his own price for living it."

"In her dealings with man Destiny never closed her accounts."

"To define is to limit."

"Women are not always allowed a choice..."
Posted by Angie Lisle at 12:49 AM Labels: Quotes